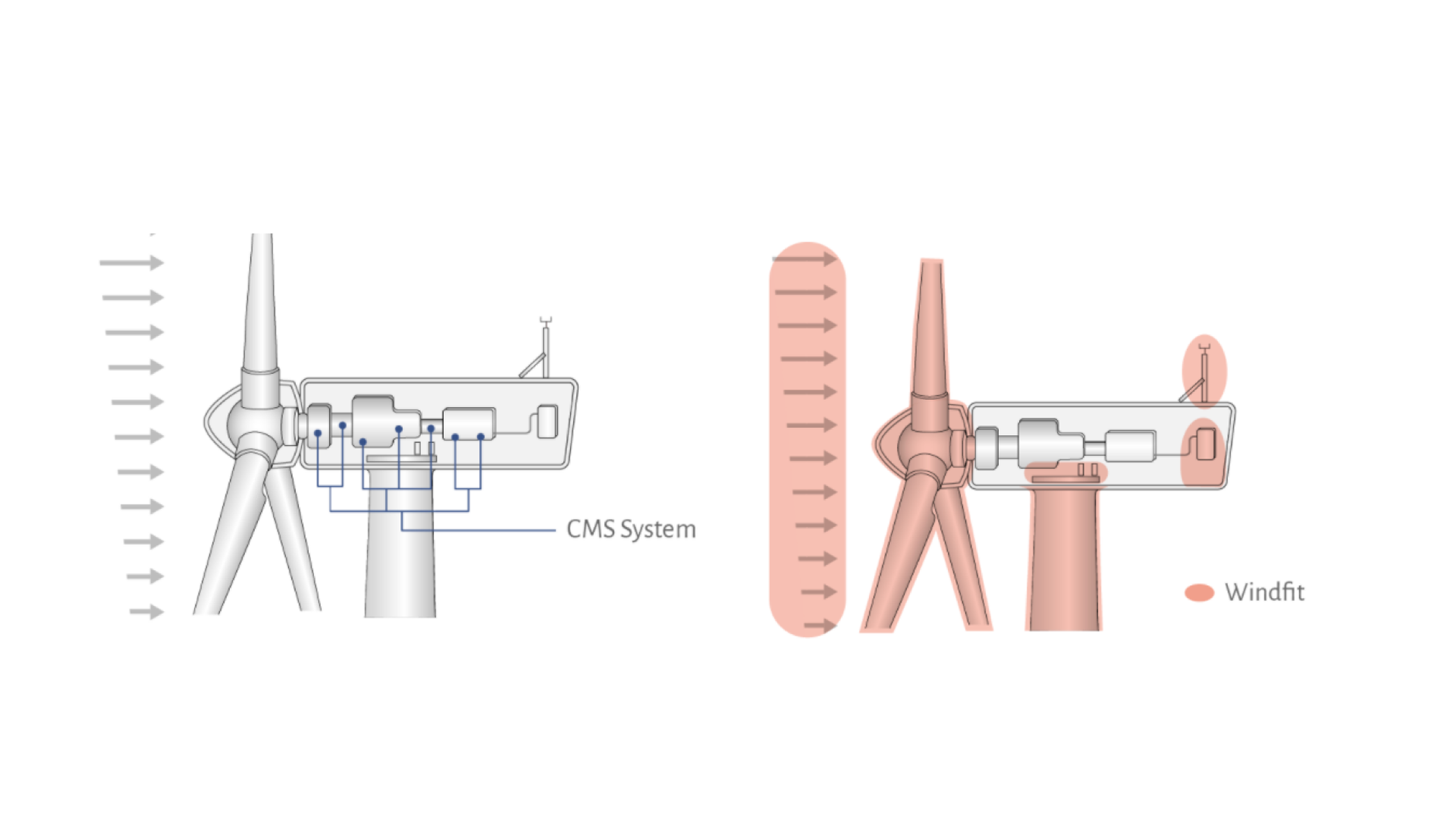 Why should I use Windfit if I have a CMS?

A condition monitoring system can detect early damage to a wind turbine component. But Windfit can do so much more.

What is a CMS?

A CMS (or Condition Monitoring System) is a system modern wind turbines have to monitor the reliability (or condition) of certain major components. This system consists of multiple sensors (usually accelerometers) that, when placed on particular locations within the turbine drive train, can provide a very precise diagnosis of the health of certain subcomponents. These systems are designed to provide alarms as soon as they detect that one component is vibrating differently, which can be an indication of an early damage occurrence.

In recent years, Condition Monitoring Systems (CMS)have proven to be particularly useful to avoid sudden breakdowns of major components that are difficult and expensive to replace. For example, if the CMS system triggers an alert for a gearbox failure, the wind farm owner can de-rate the turbine, to slow down the damage, and start planning the replacement. Without a Condition Monitoring System (CMS), the turbine would have operated until the gearbox failure occurred, costing months of downtime and production loss before replacement.

How Windfit differs from a traditional CMS system

CMS systems are very good at detecting early damage on the drive train components, but they cannot be used as an overall monitoring system for the turbines. Wind turbines are composed of highly complex systems that interact with each other on a continuous and dynamic basis. Comprehensively monitoring several of these systems is required to really understand how turbines are operating and performing. The scope of a Condition Monitoring System (CMS )usually includes main components on the drive train like the rotor bearing, the low speed shaft, gearbox or high speed shaft. These are some of the components that can cause some of the most important turbine downtimes, but that do not have a direct influence on the turbine performance and its capability to operate at its optimum condition.

While a Condition Monitoring System (CMS) can provide detailed information on the vibrations measured at these components, Windfit is continuously monitoring a broader scope of turbine systems. The image above shows the differences: while a CMS system is only looking at particular points inside the turbine, Windfit monitors all the main components outside which are the key for the turbine performance.

Windfit focuses not only on reliability but also on performance improvement providing not only alerts when an issue is detected but also turbine specific plans of action to optimise their performance.

How can Windfit be combined with a Condition Monitoring System

As they are designed to monitor different aspects and components, both systems actually complement each other very well. For example, a mass imbalance on a rotor might generate certain alerts on a CMS system, as vibrations are transmitted across the drive train. However, only Windfit can detect the root-cause creating the excessive vibrations. Alternatively, Windfit vibrations diagnosis will be able to show that a turbine is presenting excessive vibration levels, and the CMS might be able to tell what particular component needs to be replaced.

The complementary between Windfit and a CMS system means that, when both systems are in place, the wind farm owner/operator is equipped with some of the best tools in the market to guarantee that not only turbines keep on spinning, but that both their performance and lifetime are optimised.